THE HISTORY OF THE CRANBURY INN 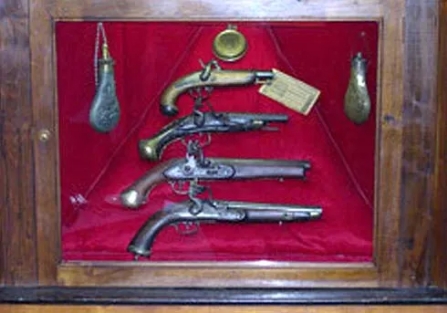 In the mid-1600s in the center of the colony of New Jersey by Cranberry Creek, a mill town began to develop along an old Indian trail that had widened into a road. This road connected the colonies and was becoming a main thoroughfare for colonial travelers. In 1697 Cranberry Towne received its charter from England. With increasing development, a need arose in central New Jersey for a place to eat and drink, get fresh horses, and spend the night; thus, in the mid-1700s (1750 and 1765) our taverns were built to meet these needs of the travelers passing through this area. After the colonies declared their independence from the motherland this business officially established itself in 1780. What is now The Cranbury Inn has been functioning as a place to eat and drink since the 1750s.

In the year 1800 Hannah Disbrow Dey & Peter Perrine were married in the Presbyterian Church across the street from The Cranbury Inn. Middlesex County Courthouse records tell us “they built as their home the house that is now The Cranbury Inn”. Their house was built across the front of our two original taverns built in 1750 & 1765, thus further developing and upgrading their business. Rev. William S. Hall, their grandson-in-law, was a Quaker and a declared abolitionist, the time frame of which seems to coordinate well with the date the New Jersey state historian put on the conversion/remodeling of a flue space on the east wall of our oldest tavern. This converted flue space is an alleged slave hiding space from the days when what is now The Cranbury Inn was an alleged stop on the underground railroad (for further information, refer to “Steal Away Steal Away” by Giles Wright). However, an unusual amount of wear on the steps to the attic of the innkeeper’s house and remnants of a door to a room and a shelf below which are nails to hang your cloak on, indicate that this attic space was used for far more than just an attic.

Enoch Middleton was an agent on the Underground Railroad. 30-40 years after this activity had ceased, he wrote an account of what it was like to be an agent on the Underground Railroad. Enoch said, “he kept enough to make a load and under the cover of darkness he would load them into his wagon and take them to Cranberry, the next stop on the road to freedom in Canada”.

In the mid to late 1800s (around 1886), the Cranberry town fathers felt the need to decide, once and for all, on a consistent name for what was called Cranberry Towne, Cranberry Village, The Village of Cranberry, or just Cranberry. It was decided to conform with the English tradition of calling a small town or village a “burg” or a “bury” and so the spelling of the name Cranberry was changed to Cranbury. Cranbury, New Jersey is a Township and in that Township is The Village of Cranbury.

On October 8th, 1902 the big barn at The Cranbury Inn burned to the ground. A square depressed area remaining in the back yard of The Cranbury Inn was believed to be the location of that big barn; this same area is the site of our new addition, a big seven-bay Dutch barn which, like the two original taverns and the innkeeper’s house, is timber frame construction.

July of 1926 a 6000 sq.ft. dance pavilion was opened on the north side of The Cranbury Inn by the Wincklhofer’s. Dances were held every Tuesday and Saturday nights (later changed to Wed. and Sat Eves.) while Perrine’s Band played. August 1930 there was an 18-hole miniature golf course opened along the north side of The Cranbury Inn. It was “lighted so as to play both day and night”.

In 1930 the Wincklhofers sold The Cranbury Inn to Adrian & Marge Van Ravesteyn. The Van Ravesteyns lived in another house in Cranbury so they converted the bedrooms of the innkeeper’s house into inn rooms, thus further developing and upgrading The Cranbury Inn’s business. They remolded our second oldest tavern importing wood paneling from an old hotel in Cape May and having murals painted as part of the W.P.A. work project. It was in this tavern that Adrian’s friend from Princeton would come to The Cranbury Inn to drink beer with and speak German with his friend. That gentleman from Princeton was Albert Einstein. Over the years many additions and alterations were made to the kitchen and support areas of The Cranbury Inn to further develop and upgrade the business.

When the Main Dining Room was built around 1930 a section of the wall was left exposed through a glass covering so future generations (you & I) could see the timber frame construction from 1750. You see the handmade ax cuts right away, but with closer examination, you see the timber framer’s angular marks used to identify which beam was made to fit into which post when it was time to put together all of the posts and beams he had made. Angular marks are put on the exterior walls of the building so this also helps to tell us that originally this was the outside wall of this tavern. The state architectural historian who examined these structures noted that the handmade bricks that fill in the walls are laid up in the Monmouth County style of laying mortar, thus indicating to us that craftsmen came west into the primeval forest that existed here in the mid-1700s to help develop civilization.

Also enclosed in this space is a deed said by local legend to transfer this property from one owner to the next in the year 1765 when we were under the rule of King George III of England. You can see the stain from the red sealing wax used for the signer’s seals ~ quite the official document of the time.

In 1982 the last of the rooms that the public stayed in was converted to private dining rooms, a change that again further developed and upgraded the business. The Cranbury Inn has a little room for two for private dining as well as three other dining areas on the second floor, one with a working fireplace.

Many famous people have been here at The Cranbury Inn. We can only speculate about the colonists & founding fathers who used the main thoroughfares connecting all of the colonies because there is no written documentation to tell us if this was the way a particular person traveled or if this was a post house or inn they stayed at during those travels. However, we do know that Mme. Chiang Kai-Shek and her entire entourage were here in April 1943, the Prince & Princess of the Netherlands were here, and the entire City Council of Moscow was here in 1995.

Albert Einstein came here frequently to drink beer with and speak German with his friend and inn owner Adrian Van Ravesteyn. Brook Sheilds came here when she was attending Princeton University. Paramount Pictures filmed scenes from the movie “I.Q.” here featuring the inside and outside of The Cranbury Inn as “The Old Geneva Café” so Meg Ryan, Walter Matheau, Lou Durning, Tim Robbins, Susan Sarandon, and all the producers and directors were here at The Cranbury Inn for four days. Various news personalities have had dinner here away from the limelight so their names are not mentioned at this time, and someday we hope you will be here too.

Hamilton and Lafayette left Cranberry Towne in the early morning hours of Saturday, June 26th, 1778, Hamilton on horseback just after midnight and Lafayette with the troops at first light. They headed south through Hightstown and on to Robbin’s Tavern in what is now Clarksville, New Jersey. Later that day they continued to communicate with General Washington, now in Cranberry Towne. The strategies were laid out in those communications that lead to confronting the British in Monmouth Courthouse, New Jersey that very hot June in 1778. This “confrontation” became known as the Battle of Monmouth — one of the few battles the colonists won during the Revolutionary War. This battle was won with the help of Molly Pitcher a famous American heroin that had also been encamped here in Cranberry Towne *1.

The actual letters that Washington, Hamilton and Lafayette wrote to each other were found in the Smithsonian Institute documenting the history that occurred here; that is, the strategies that lead to fighting the battle of Monmouth were made here in Cranberry Towne, the heroes of that battle had a respite here just before fighting that battle, plus the fact that General Washington, Alexander Hamilton and Le Marquie de Lafayette spent time here during the Revolutionary war *2.

“The Cranbury Inn is truly a gem in the crown of New Jersey.”

As time marches on so does our history, it is a continually growing thing as is The Cranbury Inn business. Come visit us and be a part of our history.